image Of Course It’s A Tank!

Not really anything new for this post!  Was asked the question “how do you paint rust?” to which the immediate answer which passed through my head was “I don’t” followed by “Badly?”!  Since I’ve painted rust streaks on 1:600 scale ships it seems the second answer’s closer to the truth!

Only painted rust on one “vehicle” that I can remember and that had to be dug out of a cupboard for photographing (‘fraid I had to use flash on this one)!  The vehicle is from Dream Pod 9’s 15mm Gear Krieg alternative WW2 range and is a German Uller combat walker!  But it looks right in 20mm scale and I added a Skytrex 20mm German tank commander and cupola ring mount machine gun to give it a bit more character. 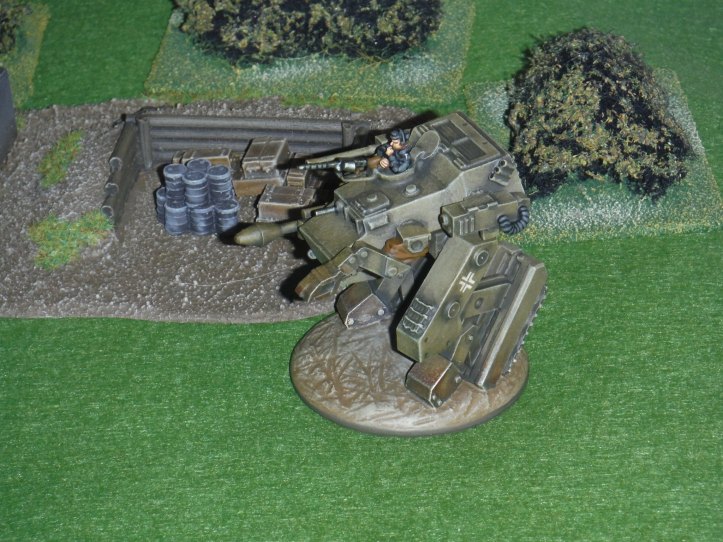 Painted it up in my usual Humbrol 84 then painted some red-brown patches to approximate the areas of rust that might develop on the walking surfaces of the legs and on the gripping part of the hand/claw/grab!  Used white spirit to soften the edges of the rust patches, then put on the black/brown dirty wash after that had dried.  Drybrushed gunmetal over the rusty areas and the gave the whole thing a drybrush in an earth/white mix.  The idea was to represent areas that would have had paint scuffed off, subsequently rusted a bit, but then new activity would cause the same areas to start scuffing back to bare metal!  Not a great idea, but the dirty wash makes it look believable I think!

This model was painted a good few years ago, as evidenced by the hand-painted markings, and I really like it!  Should maybe try and do some more!