Well, September’s over already and, for me, it seems to have been a poor month for painting figures! 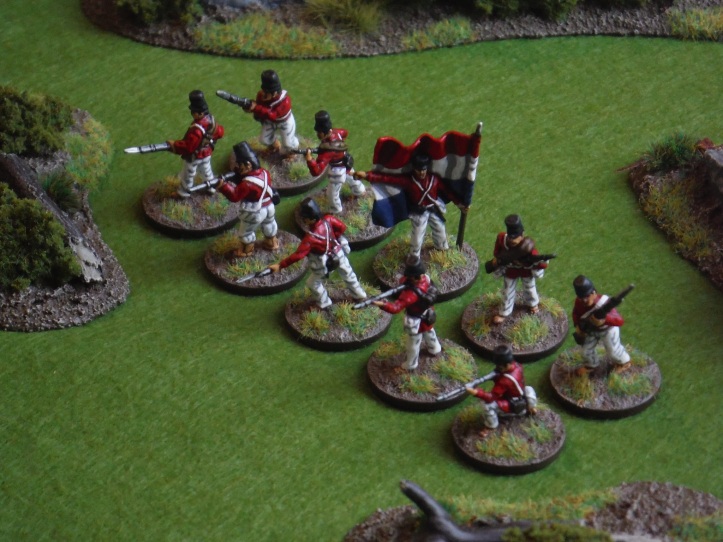 Despite that, I’ve now finished the first unit for my Paraguayan War project, a Paraguayan infantry battalion, shown in the picture above.  The figures are converted from metal 20mm and plastic 1:72 scale American Civil War infantry, the former by Newline Design and the latter by IMEX, Accurate and A Call To Arms.

In all cases I’ve glued plasticard discs to the kepis and filled the gaps with green stuff to create the taller Paraguayan shakos.  Most of the Newline figures had to have the socks they were wearing filed down to look like bare legs and feet, whilst the plastic figures usually only needed to have the tin cups hanging from their equipment removed!  The Newline figures also have minimum equipment, which makes them ideal for representing Paraguayans.

I’ve followed dress and uniform regulations as accurately as I can using converted figures, but have taken take a couple of liberties in the painting of them!  I’ve also varied the heights of the shakos and made them look a bit more battered looking, as shown in some of the older pictures I’ve seen.

Basic colours are all accurate, but I’ve simplified the details.  Many, if not most, of the Paraguayan ordinary ranks wore a horizontal-banded red-white-blue decoration around the base of the shako, along with either a cockade or stylised-feather motif on the front of the shako.  I’ve not bothered with these, since they’d take me far to long to get right and are more of a challenge than my eyesight needs at the moment!  In many cases the red jackets or shirts had collars, cuffs and a central button panel in black, but I’ve left these off, once again, because they’ll just take that much longer to do!

That all might sound a bit slap-dash, but the end result still looks right from a distance, Paraguayan infantry in black shakos, red jackets and white trousers.  Varnish has maybe not come out as matt as it could have been, but the colours look OK as far as I’m concerned.  Allied troops next and I’ll have to get a move on!

Have also got the latest book on the conflict by Gabriele Esposito and Giuseppe Rava, “The War Of The Triple Alliance”.  A quick leaf through shows that it concentrates on the armies and has a lot of colour illustrations.  The  author and artist produced the Osprey equivalent Men At Arms title, and whereas some of the subjects of the artwork are repeated (although in different settings) there are quite a few different uniforms shown!  Am looking forward to reading it in detail now that the nights are getting longer!