The Battle Of Avay!

The Battle Of Avay was fought on December 11th 1868.  It was one of a series of battles fought in Paraguay in what is referred to as the Dezembrada campaign, an operation conducted by the forces of the Triple Alliance that cleared the way for the occupation of the Paraguayan capital, Asuncion.

I bet you’re thinking “he’s making this up” but I’m not!  A few of you reading this know I’ve had an ongoing Paraguayan War project running since last year, but I’ve now got to the point where I can actually wargame the conflict.  Enough troops are ready, rules are sorted, movement trays are done and . . . the game’s set up!

I’m having a go at this from memory, so something’s bound to be wrong (not least me spelling)!

At the end of 1864, Francisco Solano Lopez, dictator of Paraguay, ordered his army to invade Brazil’s Mato Grosso province, which it duly did.  At this time, Brazilian troops were supporting the Uruguayan Colorado faction in a bid to seize power in that country, and Lopez intended to support the rival Blanco faction, also using it as an excuse to grab more land and gain access to the mouth of the Rio de la Plata (River Plate).  To do so, he needed to move his army across Argentine territory, but his request to do this was refused by the Argentine government.  Brazil also asked if it could move troops across the same Argentine land so that it could tackle Lopez, but this request was also refused.  Whereas Brazil accepted Argentina’s decision, Lopez didn’t, and the Paraguayan army was launched on an invasion of Uruguay through the Argentine province of Corrientes.  In light of this, Brazil, Argentina and Uruguay formed the Triple Alliance in May 1865 with the aim of bringing about Paraguay’s (and Lopez’s) defeat.

Initially, the Paraguayans took the offensive and, somewhat surprisingly, had some success because their army was larger than the combined active regular forces of their enemies!  But once the Triple Alliance mobilised sufficiently, the odds were stacked against Paraguay – the Allies seized control of the rivers through which all trade passed and the Paraguayan Army was pushed back to its own country.

The Allies invaded southern Paraguay and fought some pitched battles before being halted by the fortress of Humaita, which controlled access to the capital Asuncion via the River Paraguay.  After a prolonged siege, the garrison of Humaita surrendered in mid-1868, but not before Lopez had withdrawn his army north and set up another defensive line south of Asuncion.  However, a bold move by the Allies bypassed this line and they moved inland from the River Paraguay in a bid to destroy the by-this-time sorely pressed Paraguayan army.  The scene was set for the Battle of Avay!

I played this game on December 12th, one day after the 150th anniversary of the battle.  I opted to command the Paraguayan army and hold a defensive position against the attacking Allies, the latter commanded by my regular wargames opponent John (he usually does way better than me in the attack).  Since this was more of a test of the rules, the game set-up only loosely followed the historical battle.  I set the Allies the task of capturing Lopez, who they believed to be encamped with his army, in 10 game moves.

In this game the Paraguayans had five infantry battalions, a cavalry regiment and a gun battery.  The Allies had seven infantry battalions, a cavalry regiment and two gun batteries.  The odds aren’t as high in the Allies favour as they were in the real battle, but I assumed the Allied superiority in rifled weapons would help them.  All of the Allied units were considered “Regular” as far as morale was concerned, with the exception of the single Uruguayan battalion, which was rated “Veteran” (the Uruguayans frequently served in the vanguard of the Allied army).  All of the Paraguayans were considered “Fanatics”, the highest troop morale class in the rules and a reflection on their determination.  Generally, the rules do not permit infantry units to charge units of equal or greater strength, but the Uruguayans and Paraguayans were allowed to (again, a reflection of their morale level and combat record during the war).

It’d be nice to think I could relate everything that went on in the game here, but there was a lot of action and a lot of to-and-fro in just a couple of hours, so I can only give a broad outline of what happened. 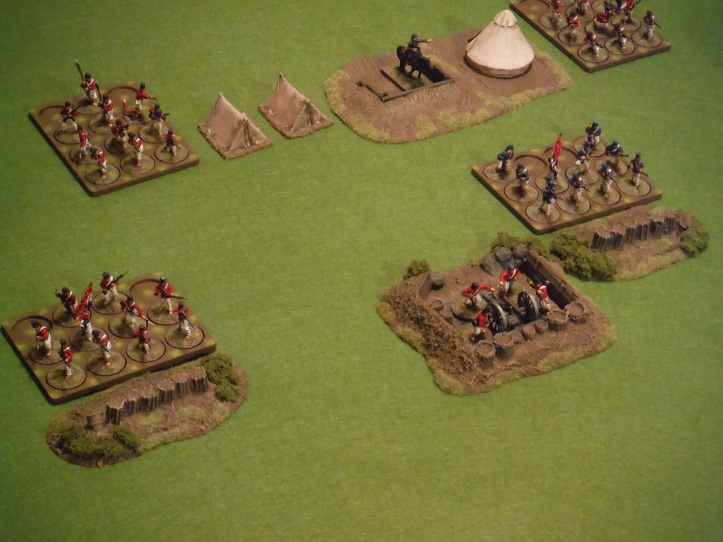 The Paraguayans occupied a small camp with some hasty fortifications in the centre (picture above) and small woods on the flanks.  Their artillery was positioned in the centre of the line flanked by an infantry battalion on each side, with another infantry battalion occupying one of the woods on the left flank.  Two infantry battalions and the cavalry regiment were held back ready to reinforce the front line as required.  In the real battle the Avay stream/river ran in front of this position, but it was shallow and fordable in many places, so I simplified the layout by leaving it off!

The Allies drew up in an extended line opposite this position, artillery in the centre, Brazilians on the right flank and Argentines and Uruguayans on the left (picture above).  To avoid the Allies just sitting back with their rifled artillery and small arms and just shooting the Paraguayans down, the Allies were tasked with capturing Marshal Lopez, who they were told was in the Paraguayan camp (he wasn’t), within 10 moves!

To John’s credit, he started the Allied attack pretty sharpish, well supported by his artillery.  As the Allied infantry halted and formed into line to start softening up the forward Paraguayan positions, the latter’s artillery manage to start inflicting casualties at short range, firing case shot into the Allied lines.  Before the Allies managed to form assault columns however, the forward Paraguayan battalions charged and forced one of the Allied battalions back.  Quick to recover, the Uruguyans charged the Paraguayan line but were cut to pieces by case shot, musketry and Paraguayan bayonets!  The two Argentine battalions “supporting” the Uruguayans quickly halted, formed into line and opened fire on the Paraguayans (at a safe distance) while their cavalry manoeuvred into position to launch a charge (picture below).

On the other flank, a similar charge by the Paraguayans kept the Brazilians at bay, but firepower and countercharges gradually took its toll on both sides.  The Paraguayan cavalry charged twice to push back a Brazilian Cazador battalion (picture below), but the horsemen were shot to pieces by the fire from three infantry battalions!  The cavalry’s charge did, however, help Paraguayan infantry regain control of the wood on their left flank.

At this point, the remaining Paraguayans decided to call it a day and pull back.  Only two infantry battalions remained, one battered but still in control of the woods on the left flank it had held against Allied assaults.  The Allies, however, were not in good enough shape to follow up their hard-won victory – three infantry battalions had been lost and two of the remaining four battalions, along with the cavalry, were in poor shape.  An Allied victory, but it had been difficult fight!

The real battle took place amidst a torrential rainstorm, the Allies outnumbering the Paraguayans by four-to-one.  Casualties were heavy on both sides, and the Paraguayans were soundly defeated. Two further battles took place in December 1868 before the Allies occupied Asuncion.  The war dragged on for more than a year after that as the Allies hounded Lopez and the remnants of the Paraguayan army into the interior of the country.

It was a good game, with a lot of action and a clear result after a couple of hours.  It was the first time I’d tried the rules in a larger game, with figures, against a real opponent (as opposed to trying them out on my own).  Although the rules are simple, they do seem to capture the tactical decisions and ebb and flow of mid-19th battles, something that I hadn’t managed to do with my own rules.  So I’m looking forward to trying them out with my French, Austrian and Prussian armies.  Having said that, I’ve still got more Allied and Paraguayan troops to paint whenever I get round to them.  Unfortunately, I didn’t get any scenery done for this game so that’s on my to-do list as well.

Having got this far with this project, I’d like to thank you all for the interest you’ve shown in it, and your comments and feedback.  It’s been much appreciated and helped keep me motivated to see it through!