This month’s community painting challenge over at Azazel’s Bitz Box has two parts to it, either paint something armoured or feature one of your armies on your blog.  So far, I haven’t finished anything armoured this month (getting close though, just needs varnish) so I thought it was time to feature one of my armies, my late-WW1 Germans in 20mm scale.

These got painted over quite a few years and I finished the last item, an A7V tank, a couple of years ago.  Since the way I’d organised them was a bit complicated, I simplified things earlier this year, re-squadded everyone, painted a Lewis gun team, photographed them all and then remembered I still needed to glue some new scatter grass on some of the bases to replace some older flock that had discoloured!  I re-did those bases a couple of weeks ago, which gives me enough of a reason for including them here now (although I’ve still used the original photos). 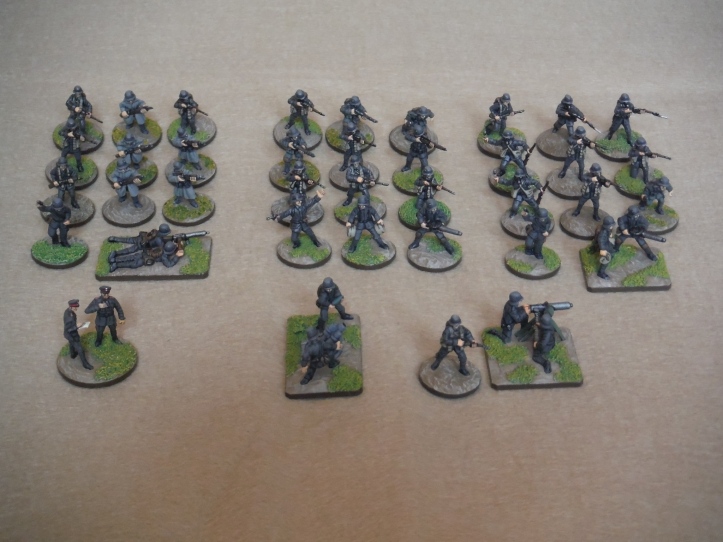 The core of my force consists of an infantry regiment containing three 10-man infantry battalions, with all of the troops wearing the steel helmets introduced in 1916.  To represent units in 1917/18 each battalion can have a two-man light machine gun team added to improve its firepower, but the regiment also has a heavy machine gun team, minenwefer (mortar) team for support, along with a two-man command stand (all shown above).  Figures are a mixed bunch; the oldest are 20mm metal figures from IT Miniatures and these are backed up by 1:72 plastics by HäT, Emhar and Caesar Miniatures; individual styles are different too, with some of the figures wearing coats and minimal equipment, some with ammunition bandoleers and some with gas masks.

An additional element is provided by my assault battalion, the troops referred to as stormtroopers.  Although I found it difficult to find an organisation table to work from for this unit, I’ve put together something that has all of the elements it needs for this larger unit.  It contains two-five man rifle companies, a machine gun company, a flamethrower company, an infantry gun company and a command element.  If I don’t need to use it as an assault battalion, I can just remove some of the figures and reconfigure it as a standard 1917/18 infantry battalion. 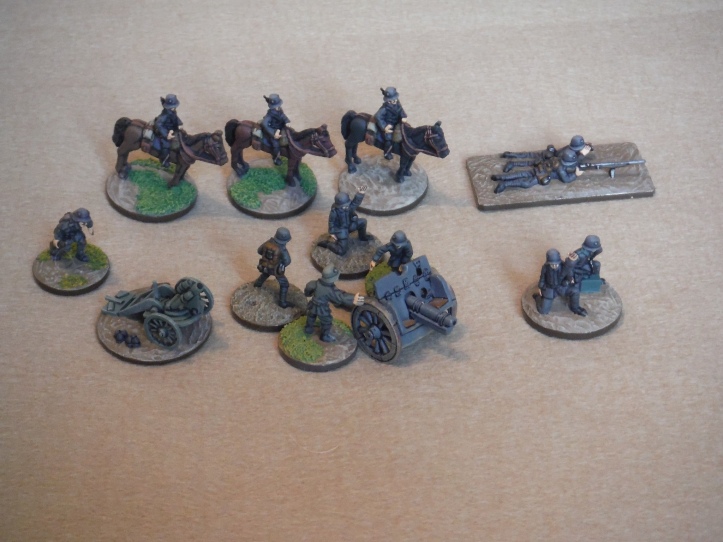 As far as support units are concerned I’ve got a three man cavalry/reconnaissance squadron, an artillery unit with either a 77mm field gun or 75mm minenwerfer, an artillery observation team and an anti-tank rifle team equipped with the vicious 13mm T-Gewehr.  I scratchbuilt the minenwefer carriage from drawings I found on the internet showing the special carriage that allowed it to be moved and deployed for either high angle indirect or low angle anti-tank fire. 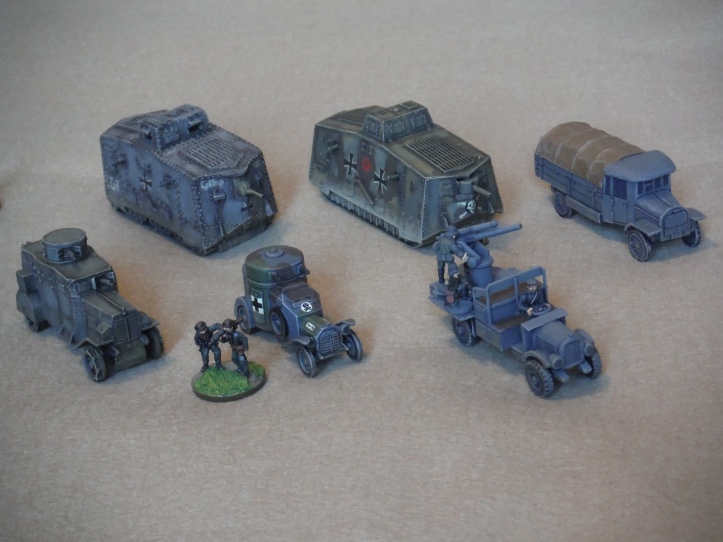 Last of all are vehicles (and some of these featured here).  In the back row are two A7V tanks, the one on the left in resin from Frontline Wargames and the one on the right the Emhar plastic kit.  Also in the back row is a “generic” truck in resin, I think by Faust Studios/Second City.  Front left is the very nice Shellhole Scenics resin Ehrhardt armoured car.  Next to it is the old Raventhorpe Miniatures Lancia armoured car, the first of my German vehicles (captured on the Italian front, I think this probably  represents a post war Freikorps vehicle, but I didn’t know that when I painted it); the German tank crew standing next to it are IT by Miniatures.  Last but not least is an anti-aircraft gun truck, converted from an Irregular Miniatures truck.

It’s not a big army, but a quick count totals 85 figures including the truck driver!  As it stands, I can use it not only for WW1 operations from 1916 to 1918 but also for Freikorps and White Russian units operating along the Baltic coastline in 1919.  So it’s a pretty useful army to have!  Wonder how long it’ll be before I decide it’s not really finished!