Blogging and getting models painted and finished seems to have slipped a bit lately and the subject of this post was actually painted in June sometime!

The vehicle featured here is a German Panzerjäger 1 (literally Tank Hunter Mark 1) in 20mm scale.  It might not look impressive (hence the title for this post, and the model’s only a couple of inches long anyway) but when it entered service in 1940 it had a respectable gun for its size.  The German Army had realised that it might need a heavier anti-tank gun than its standard 37mm weapon to defeat French tanks, and so mounted some of its captured stock of excellent Czech 47mm anti-tank guns onto the obsolescent Panzer I chassis to produce the Panzerjäger 1.

I wanted this model to go with the early WW2 German tanks I’ve been working on and it was actually bought, built and painted over a period measured in weeks rather than years!  There are not many models of the Panzerjäger 1 in 20mm/1:72 scale and I opted to go for the Britannia Miniatures/Grubby Tanks resin model.  The hull and superstructure are cast in one piece and the hull comes right down to ground level – I don’t like this feature in models, but you don’t really notice it in this case  All of the stowed gear is moulded with the hull and the only other piece is the metal gun (plus the crew, but more about them later). 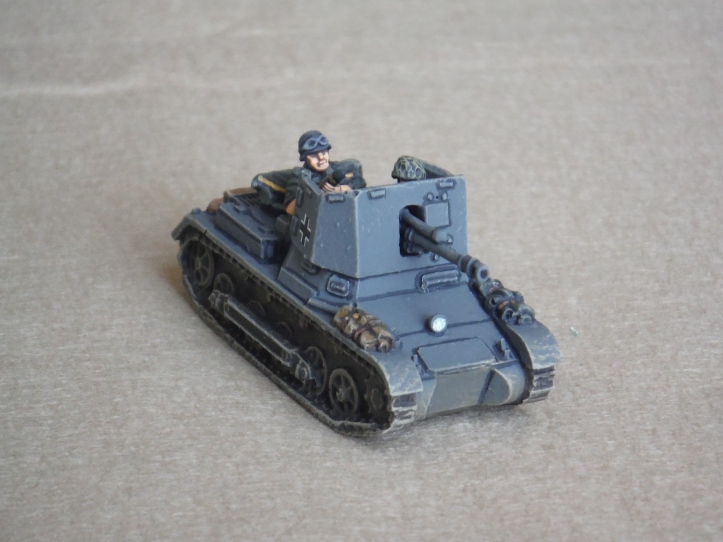 There was the odd blowhole to fill in and I added some plasticard along the bottom of the tracks to thicken them up a bit, but otherwise it wasn’t a bad model (I get fed up with mis-cast metal models with prominent casting lines that are a nightmare to deal with, which is why I opted to go for the Britannia resin model).  Finish was plain grey with Plastic Soldier Company crosses added to the superstructure to break it up a bit.  Tracks and running gear were painted brown and dry brushed in earth and then the whole vehicle got a (bit too dark) drybrushed highlight in a white/earth mix.

Since I wanted crew for it, I bought the Britannia crew figures along with the vehicle.  The gunner and loader are wearing steel helmets, which was not uncommon practice amongst crews of the lighter, open-topped, tank destroyers and the loader has goggles pushed up over his helmet while the gunner’s has camouflage netting attached.  Both men appear to be wearing tunics rather than the more usual tank crew jackets and they have high boots as well, so I think they are maybe meant to represent a Panzer Armee Afrika crew.  I agonised about how to paint them and in the end went with field grey tunics and black trousers and boots, which is not really correct but doesn’t look too out of place (given that they’re only partially visible).  The figures are in the usual Britannia “chunky” style which is both easy to paint and gives them a bit of character!

At some point I intend to feature all my German early war armour in one post, but progress is still ongoing.  I’m pleased with how this one’s come out though – it might not be as large or impressive as late war tanks but it’s a nice model.