Back in the early noughties I played the Crimson Skies boardgame, an air combat game set against the background of an alternative Earth in the 1930s.  Crimson Skies has existed in a few forms – PC and console games and a collectible miniatures game by Wizkids, but for me it was the FASA boardgame that had me hooked (same people responsible for Battletech).  Unfortunately, I started collecting plane models and playing just before FASA stopped development of the game, but there was more than enough material available to keep me going and I started converting my own aircraft designs from available miniatures.

Anyway, it’s been a long time since I played a CS game, but I’ve still got all my planes and game material.  One thing I did years ago was set up a spreadsheet with all the game stuff in it so it could be played by e-mail and now seemed like a good time to jump back to that.  Since my boss, StuG, had played a couple of games he said he’d be up for the challenge of trying an e-mail game, given the current lockdown in the UK, so we thought we’d give it a try.  The idea is we make the moves and try and resolve the combat over several evenings and keep it completely outside of work!  Hopefully, I can  remember the rules!

So, I’ve set the game up (shown above).  Crimson Skies is hex-based and in the top left hand corner of the picture you can see two crimson-coloured fighter aircraft, a Hawkeye and a Rifleman (StuG said it’s Crimson Skies, so he wanted crimson planes)!  These two aircraft are air pirates and their aim is to destroy a cargo plane being escorted by two other fighters (the grey and khaki planes shown bottom right in the picture).  The map is a downloaded jpeg and the plane symbols are gifs, so I can move them around as required – this is the position at the start of the game.  Some hexes on the map have red dots on them to represent mountain peaks, bluffs etc. and these pose a threat to low level flying.

I’m in control of the cargo plane and its escort, a Spanish Republican unit flying over Cuba (in my CS world, the Spanish Civil War rages in the Caribbean following an attempt to invade Cuba in 1935 and just about everyone piles in).  My aim is to get the cargo plane off the map safely at the point at which the two pirate aircraft have entered!  Basically, StuG e-mails me his move, I move the planes and resolve the combat.  There’s an element of trust involved, in that I don’t cheat with the combat, and to offset that to some extent I e-mail StuG my plane moves before he makes his and ask him not to open the e-mails – if I have the capability to cheat with the shooting, he has the capability to plan his moves knowing exactly where I’ll be!

I based the plane markers around CS plane models I already have, so thought I’d dig the models out and feature them here.  These aren’t in the colours shown on the game map above, because I just had to rapidly knock them up in PowerPoint. 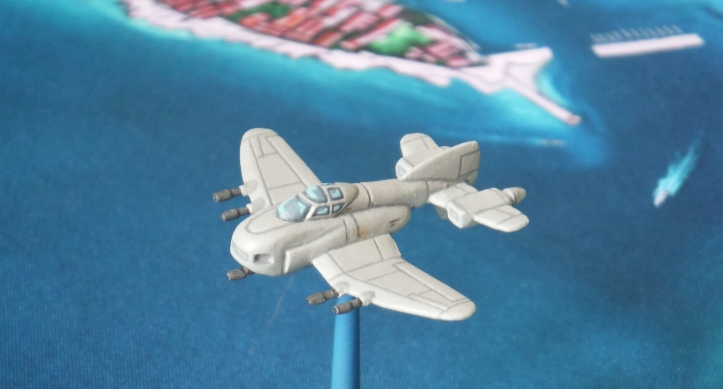 First up is the Rifleman (above), a CS design and model from Ral Partha (shown against my Wings Of Glory game mat).  It’s a medium weight, pusher-prop fighter and reasonable all-rounder.  This model is in plain grey to let me use it with various factions.

The other pirate plane in this scenario is a Hawkeye heavy fighter (above), again in a plain finish (with specks of dust on the port wing by the look of things)!  This is a conversion from a 1:300 scale historical plane (I think maybe a Japanese bomber) with a new cockpit canopy built up from milliput (CS plane models are approximately 1:200 scale).  It’s reasonably fast, heavily armed but not all that manoeuvrable, although it does have a pintle-mounted rear machine gun to deter attackers.

Next up is the cargo plane (above).  This is a 1:300 scale historical Curtiss Commando transport painted to represent a 1930s airliner, in a gaudy scheme by my standards (that I really like).  Despite being a cargo plane, it’s carrying two forward-firing machine guns!

First of my Spanish Republican fighters is the Aguila (above), a two-man, single-engined heavy fighter.  I have four Aguila models, but this one is in Spanish Republican colours.  Very fast, but not particularly heavily-armed or manoeuvrable.  This is a standard CS design and another Ral Partha model. 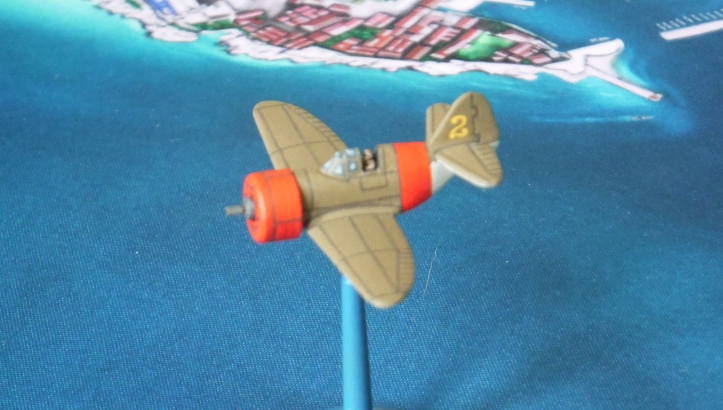 Last, but not least, is the Polikarpov I-18 Partisan (shown above in a bit of an blurry image I’m afraid).  A very light fighter, it’s not particularly fast or manoeuvrable for its size, but it mounts a heavy cannon firing through the propeller hub.  This is my own design and converted from a 1:200 P-47 Thunderbolt model with a new engine cowling (I used the original on another conversion) and a shortened fuselage.  The pilot is a GW Epic-scale Imperial Guardsman, or at least his head and shoulders!  It’s sort of in Spanish Republican colours but without any national identity markings, which lets me use it for several factions.  Despite its small size and light protection, it’s quite a reasonable fighter and very small/light compared to my usual designs.

Pilots in CS are worth experience points and gaining more points through combat allows their skills to be upgraded.  In this scenario, my three pilots are worth slightly more than StuG’s two pilots to try and balance the game, meaning individually mine are all worse.  So, we’ll see how we get on.  Given my usual track record, I’ll get hammered!  Those of you that think I might try and take it easy on SuG are wrong!  In real life, he’s my boss!  But this is Crimson Skies – this is serious!