Shot Down In Flames!

Last month I started a Crimson Skies game by e-mail with my boss, StuG.  Now that it’s finished I thought it was time to feature it here!  Normally we’d play the boardgame with painted plane miniatures, but this time it was played using a digital map and Excel plane record sheets. 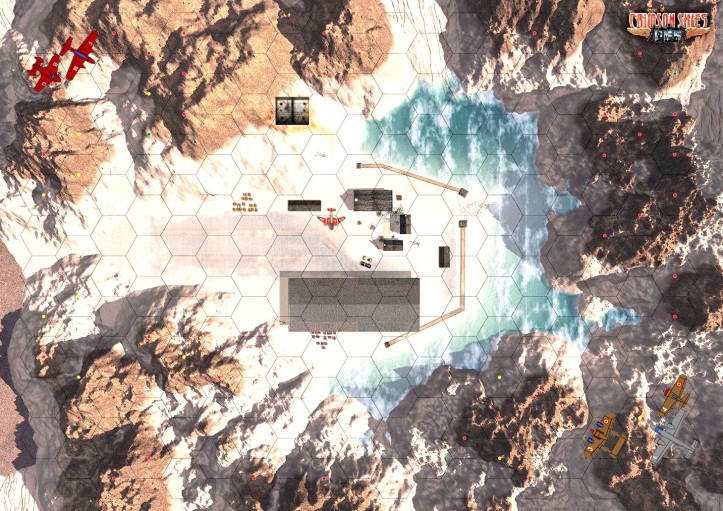 So, the game was set up as shown above.  Crimson Skies is hex-based and in the top left hand corner of the picture you can see two crimson-coloured fighter aircraft, a Hawkeye and a Rifleman (StuG said it’s Crimson Skies, so he wanted crimson planes)!  These two aircraft are air pirates and their aim is to destroy a cargo plane being escorted by two other fighters (the grey and khaki planes shown bottom right in the picture).  The map is a downloaded jpeg and the plane symbols are gifs, so I can move them around as required – this is the position at the start of the game.  Some hexes on the map have red dots on them to represent mountain peaks, bluffs etc. and these pose a threat to low level flying.

I’m in control of the cargo plane and its escort, a Spanish Republican unit flying over Cuba (in my CS world, the Spanish Civil War rages in the Caribbean following an attempt to invade Cuba in 1935 and just about everyone piles in).  My aim is to get the cargo plane off the map safely at the point at which the two pirate aircraft have entered! 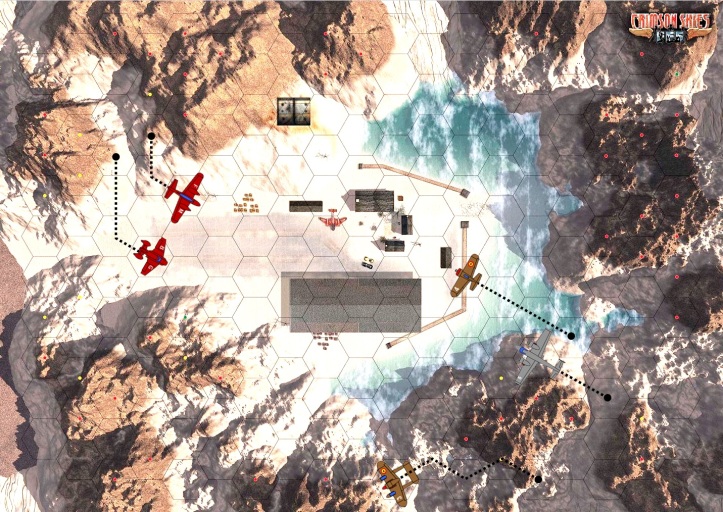 By Move 2 (above) the planes had started moving closer to each other (well, OK, apart from my Aguila wobbling along the bottom of the map), but with ranges still too long to do any shooting. 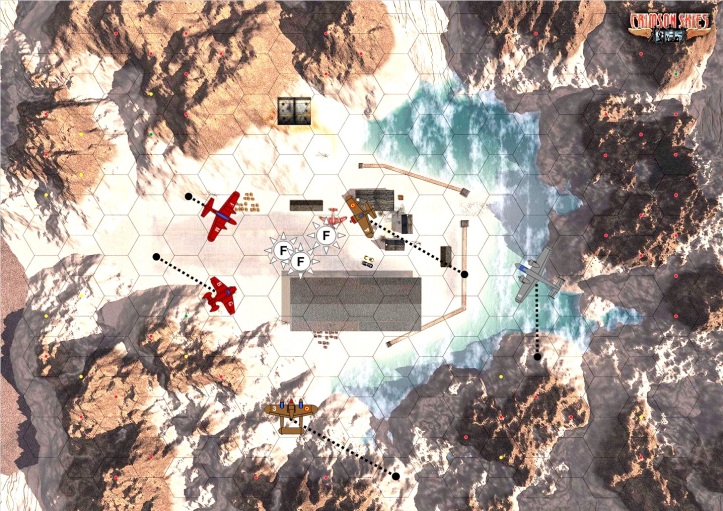 By Move 3 (above) the two sides were closing quickly and flare rockets were being fired in attempts to shock oncoming pilots into panicking and flying in straight lines!  Despite this, the Rifleman managed to put a magnesium round into the I-18s port wing, reducing the latter’s ability to manoeuvre. 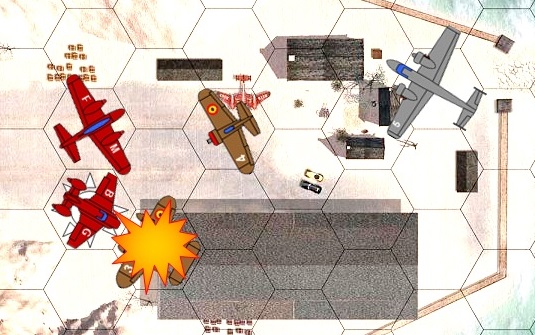 On Move 4 (above) things went seriously wrong for me as the pirate Rifleman blasted my Aguila apart before I could do anything!  As the plane exploded after a magnesium round hit one of the wing fuel tanks, my pilot was lucky to bail out, although she didn’t escape injury!  This meant I was reduced to one small fighter escorting the cargo plane! 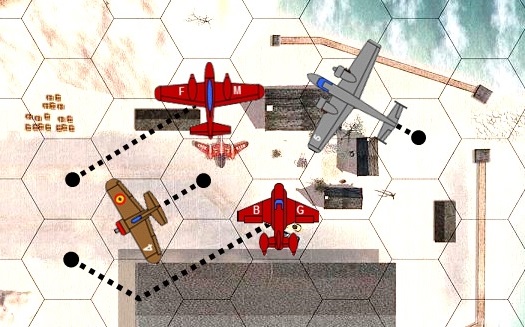 On Move 5 (above), the two pirates managed to blast past my I-18 and close on the cargo plane, so things were definitely not looking good for me! 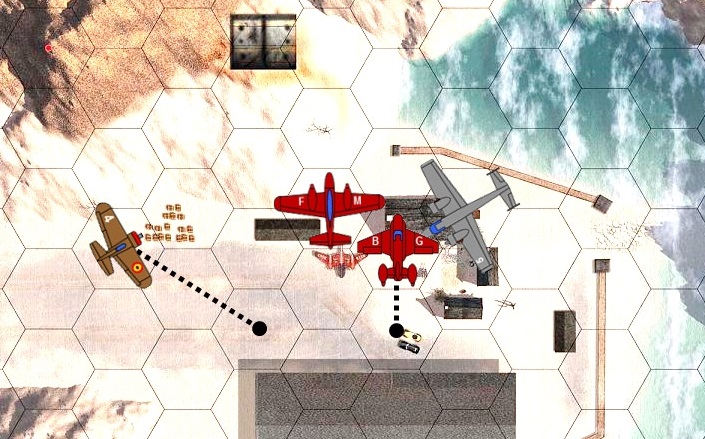 Fortunately, on Move 6 (above) the cargo plane pilot craftily stalled her plane, tricking the pirates into flying ahead of her. 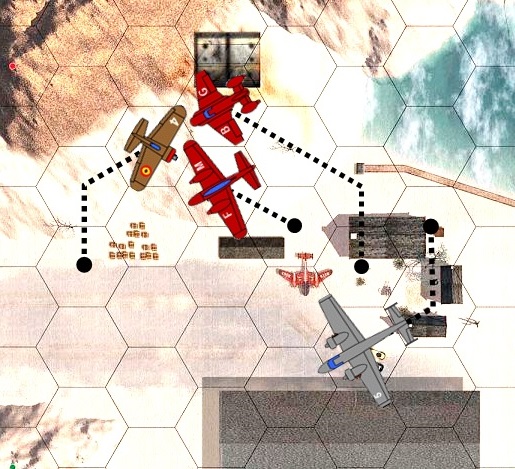 This gave the cargo plane the chance to break away on Move 7 (above) while the I-18 turned back to intercept the pirates.  Although the Rifleman got the drop on the I-18, the latter’s small size meant it got away with virtually no damage.  The same could not be said of the pirate Hawkeye, as the I-18 hit it with guns and rockets, severely damaging its engine and ability to turn (although the I-18’s cannon jammed in the process). 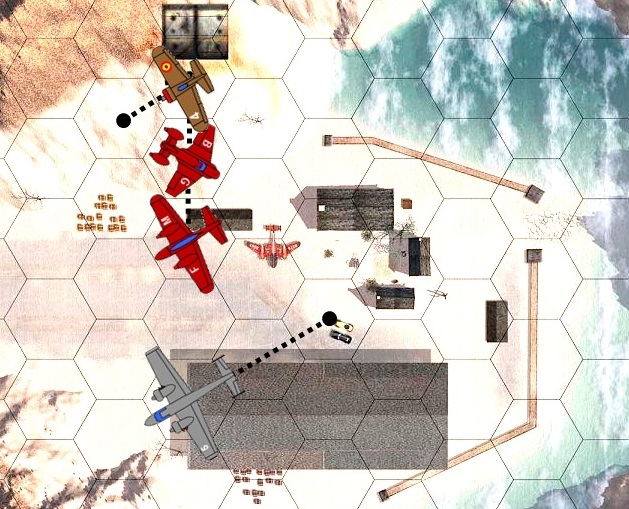 On Move 8 (above) the cargo plane pilot failed to push the plane beyond its capabilities, which was probably fortuitous because it meant its subsequent random movement kept it out of trouble!  With no targets available, the I-18 pilot also managed to clear the jammed cannon ready for the next turn. 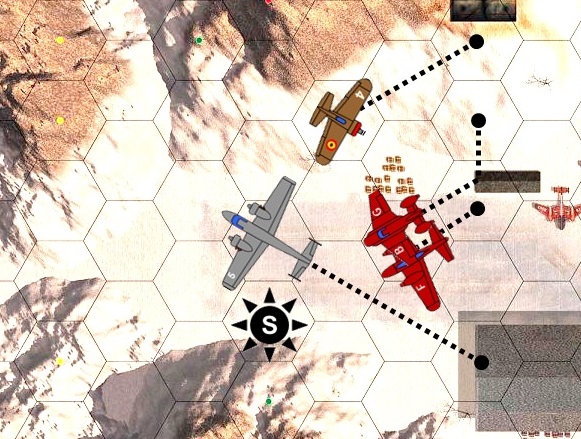 Move 9 (above) saw the Hawkeye managing to get a sonic round close to the cargo plane, forcing it to fly in a straight line for the next turn. 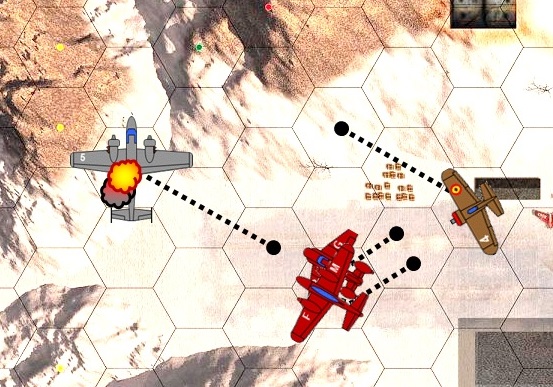 With the pirates knowing the cargo plane was going to fly straight on Move 10 (above), it was obvious to the I-18 pilot where they were going to be, so he positioned his small fighter in behind the two close-flying pirates.  Unfortunately, the Rifleman fired first and managed to shred the rear fuselage of the cargo plane with machine gun and cannon fire.  With a magnesium round burning its way towards one of the fuel tanks, the cargo plane pilot ‘chuted up and bailed out before the plane exploded.  The I-18 manged to hit the Rifleman with a magnesium round damaging the rudder controls.  Having shot down the cargo plane and achieved their objective, the pirates elected to beat a hasty retreat – with both pirate planes’ manoeuvrability impaired, they were unlikely to be able to outmanoeuvre the lighter I-18.

So this time round I failed to win, losing a fighter and the cargo plane, although all my pilots survived.  Whereas I thought I wouldn’t last long after the Aguila was shot down, I did manage to keep the cargo plane out of harm’s way for a while and damage both pirate planes.  Needless to say, StuG was pleased with his win and is quite keen to play some more games by e-mail.  Crimson Skies is quite a good game for keeping your brain active and it’s all about out-thinking your opponent (no wonder I lost then)!  So while lockdown continues in the UK, might as well try and lose a few more Crimson Skies games!

Until next time, stay safe everyone!