Well, depending on what the new WordPress editor turns out like on June 1st, this is probably either my last post with the old editor, or my last post, full stop!

I’ve slowed down quite a bit with painting, but at least managed to get a couple of things finished that fit in with Ann’s painting challenge for May/June.  The challenge is titled “Miniatures of Magnitude” so I thought a couple of dreadnoughts would fit right in.  Not your man-inside-a-big-armoured-suit type of dreadnought though – I’ve gone for a proper dreadnoughts, as in big battleships!  Well, OK, not quite ships either! 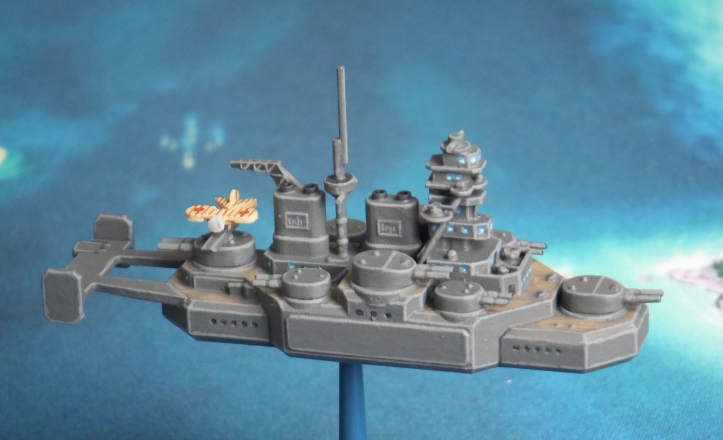 Way back in the noughties (maybe even the end of the ’90s) I started aeronef wargaming with the range of 1/1200th scale range of vessels from Brigade Models.  For those not familiar with the term, aeronefs are basically ships that fly using some form of gravity-resisting technology to stay airborne.  Anyway, I gamed with these for a few years, built up small Russian, Japanese and Chinese squadrons set against an alternative 1890s timeline and then put everything away for safekeeping!

So, I thought it was about time that I re-visited these neglected fleets and got some more aeronefs painted.  Brigade Models have constantly expanded their range of models and moved over to making many of the larger vessels in resin and they really are very nice models.  At the time I bought my Japanese and Russian ‘nefs the largest available models were of battleships, but there are now quite a few larger dreadnoughts available, so I thought I’d get a couple.

For the Japanese I bought a Shinano class dreadnought (shown above with bits just dry fitted – the fit of parts is excellent), the model being all of about 100mm long (it’s just a small scale model of a large vessel, so it counts as a miniature of magnitude).  I’d added extra details to the Yashima class battleship I bought years ago, so I decided to do the same with the Shinano (the basic models are very nice though and don’t need any tweaking).

I wanted a taller bridge structure similar in style to the historical Japanese battleships of the Kongo and Ise classes.  I added some extra bridge levels and decks from plasticard, carefully drilling out holes on either side to locate two bridge support legs made from plastic rod.  I added two small circular platforms onto the supports and added light guns and searchlights from plasticard and plastic rod, topping off the taller bridge with a prominent rangefinder.

Close to the rear funnel I added a plastic support for a metal crane (Brigade supply these separately in packs) and used plasticard to make an aircraft catapult over the rear turret (the aircraft are also sold separately).

Since I reckoned it was going to be a nightmare to paint with the turrets in place, I tacked them onto plastic bottle caps.  The vessel was painted overall in Humbrol 27 grey and the decks painted khaki drill and washed with dark grey to pick out the planking. 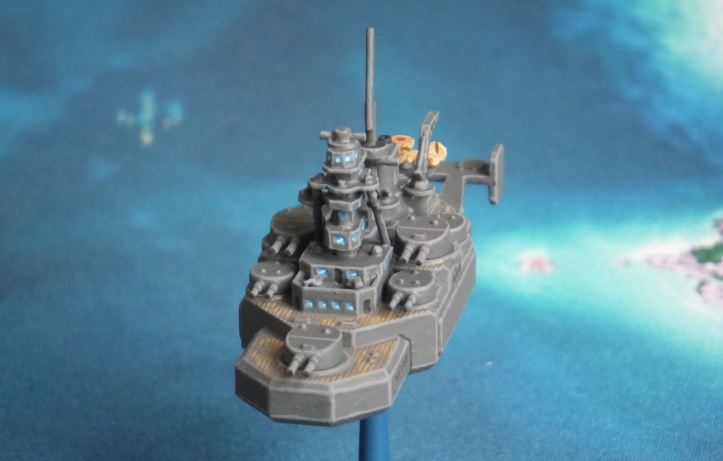 As with the 1/600th Italian coastal forces vessels I recently finished I opted to just add highlights in light grey and windows in blue.

Turrets were all stuck in place after painting – you can see from the view above how “busy” this model is!

The picture above shows the dreadnought next to my older (closer, out of focus, much less cluttered) Yashima class battleship.  The basic grey in both cases is meant to be the same, which shows how Humbrol have changed the shade over the years, but they go well together.  Brigade have since re-issued the Yashima class battleship as a nice new resin model, but I still like the style of my older metal one. 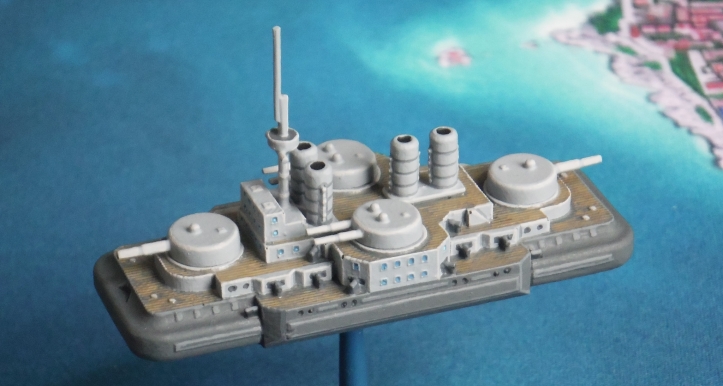 As for the Russians, I bought a Poltava class dreadnought (shown above).  Much less cluttered that the Japanese Shinano but with a very pugnacious attitude I think!

Although fewer in number, the main turreted guns are pretty big and are backed up by loads of smaller casemate-mounted weapons.  Painted the same way as the Shinano, but with light grey upperworks instead.

For comparison, here’s the Poltava class dreadnought behind my older Borodino class battleship (above).  Once again, the older model is all metal, whereas the Poltava has a resin hull and metal turrets, funnels and mast.  I quite like the new resin Borodinos though since they have twin-gun turrets now.  Brigade Models sell a lot of the new turrets in separate packs and I’d thought about refitting the turrets on my Borodinos but I didn’t think I’ll be able to get the old turrets off!

I’ve enjoyed painting these and still have some lighter aeronefs to finish for these two fleets.  I’ve also got about two thirds of a Chinese fleet done and a complete French fleet waiting patiently to be started!  I did have my own rules for aeronef combat but I’ve also got a copy of the Imperial Skies rulebook somewhere, so maybe time to dig them out!