Not too long ago my long-standing wargames opponent, John, told me he was going to start a new project.  He’s way better than me at sticking with projects to completion, although he still likes to come back to older projects from time to time and add new units and figures.

Anyway, his new project is going to be wargaming the Punic Wars in 15mm scale (Rome versus Carthage)!  I was quite surprised at this, since I didn’t recall him really talking about ancient wargaming before (and before anyone makes a comment, that’s people wargaming the ancient period, not ancient people playing wargames).  But the biggest surprise was when he said he was going to re-base and tart up his 25mm Greeks and Persians so that we could have a game to test out the rules – in the 26 years I’ve known John, I’d never even seen these figures, let alone heard them mentioned (it turns out he bought them ready-painted at a wargames show a long time ago)!

So, the plan was for John to set up the forces on his wargames table, with me commanding one of the two sides from the comfort of my own home via e-mail (in these days of self-isolation and lock-down in the UK).  To get us started, John had re-based, tidied up and added some extra figures to his Greek forces, so that I commanded a Spartan forces against his Athenian army.  The rules he’s trying out are the readily available “Hail Caesar” ancient wargames set from Warlord Games.

Now as far as tactics go, I’m worse than hopeless with anything involving a mixture of close-combat troops, ranged weapons and cavalry, but I thought I’d give it a go – the worst that could happen would be that I’d lose the game without having shown up for it in the first place!

So I got a Spartan division consisting of two hoplite (heavy infantry) units, supported by a unit of light infantry and a unit of archers.  These were supported by an allied division of the same composition, although with slingers instead of archers.  The Athenian opposition was similar in composition, although the Athenian allied division had a light cavalry unit as one of its supporting units.  For simplicity, and to give the rules a good test, the battlefield was relatively uncluttered, with just a low hill and rocky outcrop breaking up the field of combat.

I opted to have the Spartan division on my left and their allies on the right.  Spartan archers covered the left flank with light troops out in front.  Since the enemy had deployed cavalry on their left, I put my allied light troops and slingers on my right to protect it from being flanked.  Initial orders were for my Spartans to steadily advance and wait and see what the enemy did before I decided on a further course of action.  What follows is essentially John’s commentary on the game, as it was reported to me by e-mail to allow me to plan my further orders (but there is a good chance I might have got the photos in the wrong order)!

The Spartans cautiously advance as their allies adopt a holding position (Spartans bottom left in the picture above).  Across the plain the Athenians deploy, their own troops to your left covered by skirmishers.  The Athenian allies on your right seem to move forward slightly then hesitate and stop.  So far this mirrors Spartan movement (not that this was what the Athenian general was aiming at!).

On the Spartan left the Spartan hoplites are getting the better of the Athenians, but the Athenians held again despite mounting casualties.  The two mercenary archer units meanwhile exchanged fire in the rocky terrain to little effect.  On the extreme right the cavalry are still sitting contemplating life.  At this point, the Spartans are an allied hoplite unit down on the right but winning the melee on the left.

Things do not go well for the Athenians facing the Spartans. The far left unit next to the rocky outcrop routs, taking with it the supporting archers.  The other Spartan unit of hoplites, supported by the peltasts (light infantry) behind, inflict further casualties on the remaining shaken Athenian hoplites who are barely hanging on. Advantage Sparta!

The well-drilled Spartans on the left wheel smartly and charge the wavering Athenians. The Athenians take massive casualties and rout, the entire division fleeing for their lives. The victorious Spartans straighten the line and advance on the Athenian allies.  On the other flank the Spartan allies are struggling but holding on, the slingers on the hill driving off the advancing cavalry.

The Athenian allies in a last ditch effort hurl themselves at the battered Spartan allied phalanx, which finally crumbles, taking with it the entire division and the Spartan peltasts.  The victorious Athenian allies swing round and on to the hill to face the advancing Spartan troops.  Advantage still Sparta with two pretty healthy elite units against the tired Athenian allies. 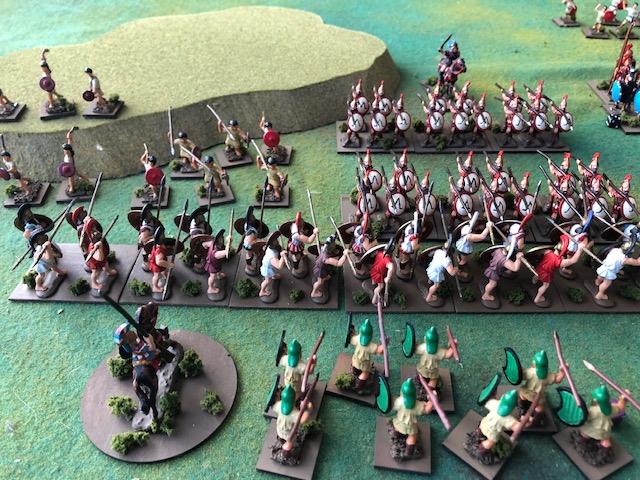 The Spartan hoplites charge the Athenian allies and sweep them away. The broken Athenians flee the field, covered by their cavalry.  A hard-fought, but total, Spartan victory!

So, that means I won without even turning up to the game!  Brilliant!  To be fair, I think John probably turned my orders into something more useful for the Spartans and maybe luck just kept me going.  It was good for me, because I had to still think about the orders to give to my troops.  John enjoyed it because he got to try out the rules against troops commanded by someone else.  It also meant we kept in touch and managed to have a virtual wargame!  I’m led to believe its Greeks versus Persian next, so I maybe need to brush up on my history!