. . . StuGs!  For those unfamiliar with the word, StuGs were reasonably well armoured self-propelled guns used by the Germans and their allies in WW2 to support infantry units in operations against bunkers, strongpoints etc. the idea being that their armour would let them get relatively close to the target and provide accurate close range fire.  StuG is short for the German term Sturm Geschutz, which can be translated as assault gun.  I don’t often do work in progress posts but I’m on a roll after getting a couple of tank kits built during the week so last night I built the 20mm scale StuG IIIG kit I had from the Plastic Soldier Company.

Quite a few years ago I bought the Armourfast StuG III kit, which had two models in the box.  I think this was one of the early versions of the model since it didn’t contain the side skirts that were common on late-war StuGs and which were intended to provide an additional measure of protection against hand-held infantry anti-tank weapons.  Any way, I built one of them, added skirts from plasticard, and finished it as a Hungarian army vehicle (and it was the subject of one of my first posts on this blog).  The second model got built without skirts and primed in light grey ready to be completed at some point as a Finnish army vehicle.

The Armourfast kit lacks a lot of detail though, and the lack of side skirts just compounds that to some extent.  So I was pleased last year when I managed to get a single Plastic Soldier Company StuG from eBay (they usually come in boxes of three).  The PSC model goes together well, is quick to build but still contains a lot of detail.  It allows options to fit side skirts, a 75mm gun or 105mm howitzer in either early or late mantlets, early or late roof-mounted machine guns (the latter in a remote-controlled mount), extra armour in front of the commander’s cupola and a commander figure as well. 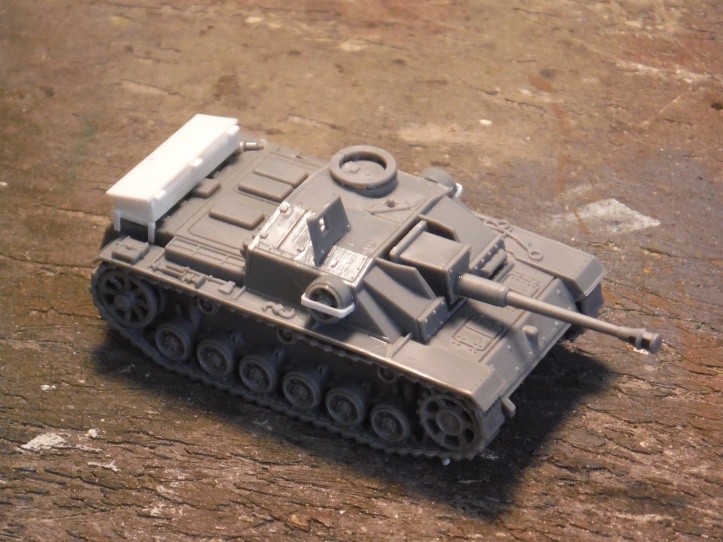 I decided I’d build it as a basic Finnish StuG III with the early external machine gun shield in place (but with the MG stowed inside), the early, blocky, gun mantlet and no side skirts.  Most Finnish StuGs carried a large stowage bin on the rear engine deck, so I knocked this together from plasticard and added a support frame around it from plastic strip.  The spare roadwheels normally carried on the engine deck were moved to the forward superstructure sides, with retaining straps added from plastic strip as well.  The plastic strip was tricky to get in place so I’ve maybe not gone for a truly accurate representation of some of these bits, but they’ll do for me.  The only bits that didn’t fit as well as the rest of the kit were the top runs of track, leaving small gaps above the front sprocket and rear idler wheels.

So having built the PSC kit to represent a Finnish StuG I decided to tidy up the neglected Armourfast model that was originally intended to fill that role.  To resolve the lack of detail issue on the Armourfast kit, I just took the side skirts and spare track from the PSC kit and glued them onto the Armourfast one!  Sorted!  Although some manufacturers represent similar vehicles with slight detail variations, the PSC side skirts and support rails fitted onto the Armourfast kit perfectly.  This StuG is going to be finished in overall dark yellow at some point, with no markings whatsoever.  That will allow it to be used as a German, Hungarian, Bulgarian or Romanian vehicle (although I’d also need to have Hungarian, Bulgarian or Romanian troops to go with it)! 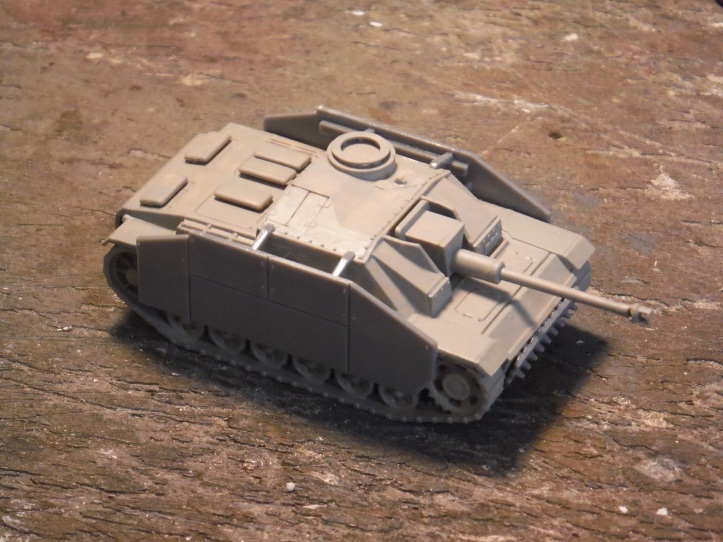 Once I can finally work out what colour to use for the brown on Finnish tanks I’ll have to think about painting the PSC StuG (I’ve got plenty of references, some contradictory, but in the end I’ll have to go with what I think looks right to me).  But I’m not on enough of a roll to think about painting it at the moment.  Well done if you’ve got this far with this post – it seems only right to dedicate it to my Finnish followers (and those of you with Finnish ancestry)!