And The Tanks Get Smaller!

Last month’s community painting challenge over at Azazel’s Bitz Box was the Jewel Of July challenge.  I’d like to think, since the model featured here is the ONLY model I’ve finished in July, that it qualifies for this challenge but, sadly, it doesn’t!  Why?  ‘Cause it’s way too small!

This tank is a Russian T-37A light amphibious tank dating from pre-WW2.  The model is a 20mm scale metal kit from SHQ and quite a neat model.  The T-37A was armed with a single machine gun and used by the Russians for reconnaissance and infantry support tasks early in WW2.

The idea was probably sound, since Russia has an extensive river network and some pretty impressive marshlands, so what better to scout these out than an amphibious tank?  Unfortunately, to achieve adequate water buoyancy with a tank it usually needs to be big and/or thinly armoured, and the T-37A was not a particularly effective vehicle.  It manoeuvred in water by means of a small propeller and rudder at the rear of the hull and both of these are represented quite well on the model (not shown on the photos – I stuck these to my hands on a couple of occasions while trying to get them in place)!  As with a lot of metal tank kits/models there was no bottom plate to the hull so I added one from plasticard to make it easier to handle. 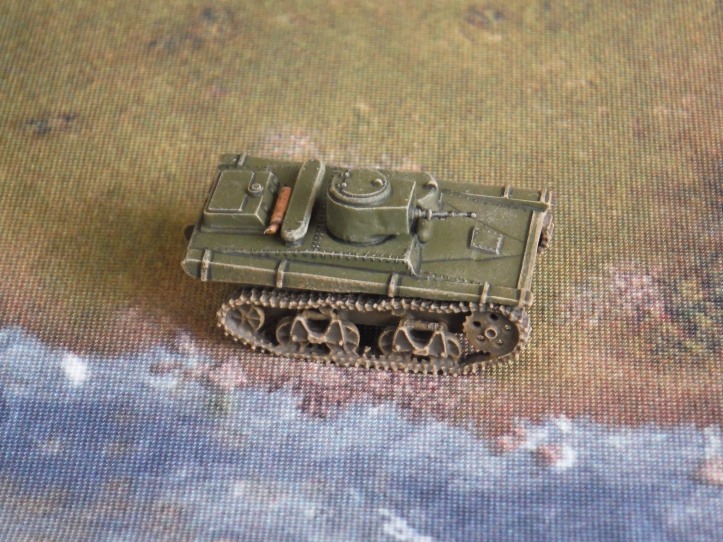 This model was sitting unpainted on my board back in April and the only reason it got finished in July was because I needed a “quick win” to at least get one model painted!  It was painted in a similar manner to the not-much-bigger Panzerjäger I that got finished in June, although the base colour was Vallejo camouflage green and not grey (the pictures here seem to have given it a brownish tinge more like US olive drab, but it is more of a true olive green colour in reality).

I thought it was maybe a good idea to add some figures in a picture next to the tank to give an idea of scale.  They’re meant to be a Russian command group and it was only afterwards I thought that maybe they’ve got a red flag to indicate that it is unsafe to go into the water!